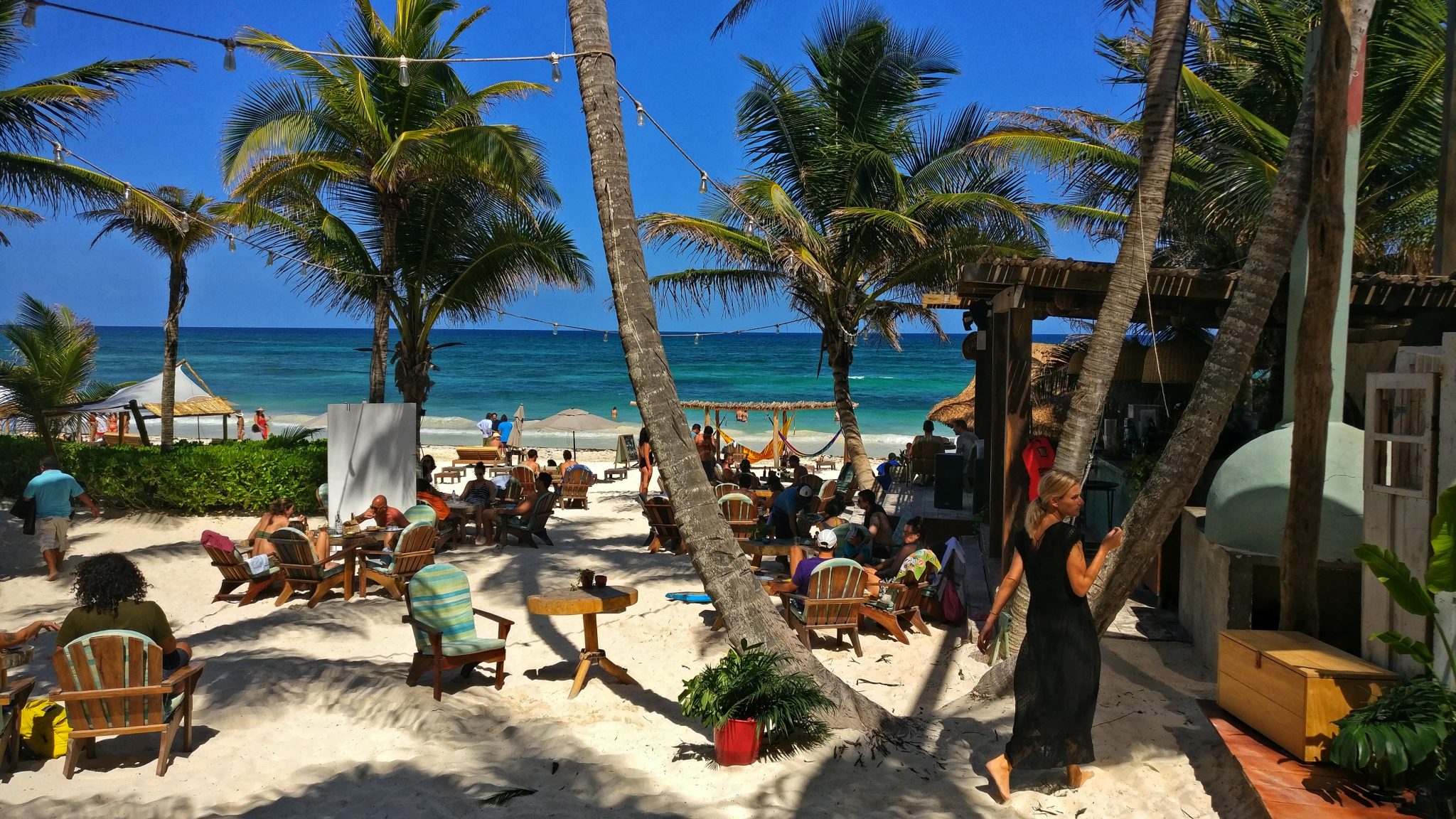 Yes, Mexico. We escaped crazy Belize and seek refuge in Mexico. With success. More about that right now.

As I wrote in the article about Belize, the conditions there are not meant for relaxation or recreation. In addition to the seagrass, the sandflies, the neglect of the houses and people, a lot of mosquitoes, cockroaches and a scorpion. He had just made himself comfortable in my towel when I wanted to dry myself. He did not think, it was that funny and quickly stabbed me in the thigh. Then an equation shot through my mind that went something like this:

I corrected the result after a short recalculation to “very bad”. In retrospect I can say it hurt like hell, but after two days it was ok. After the owner of our beachhut was very relaxed – whether this was owed to the vast amounts of alcohol, I can not say – he gave us a refund after we threatened him to give a bad rating. So we drove that same day to Cayo, to the borderland to Guatemala, where Maya history was waiting for us.

Cayo – not a good idea either

Basically you experience Belize as a developing country – which it is. Nowhere is this as clear as in the borderland with Guatemala. There are many stories of drugs, murder and manslaughter, etc. The nicest thing, is to get ripped off by everyone there. Prices on cards in “restaurants” or in supermarkets do not match or are simply ignored. If you make people aware of this, the answer is that this is an old price. We have made several trips. Two are worth a mention:

“Welkooom to Shun-na-te-nutsch”, it sounded proudly from our guide Elfuego. Elfuego was the father of our actually booked guide, who solved a small date clash by sending us his father. Elfuego was about 80 years old (maybe older) and grew up in the gardens of Xunantunich. His mother was one of the first rangers in the park when he opened his gates for tourists. Xunantunich is not the largest, not even the oldest Mayan ruin of Belize, but one of the most significant. It was a place of games and receptions. On the way to the most important Mayan city of the ancient world – Tikal (now in Guatemala) – Xunantunich was a popular place to stay. The Maya had roads, knew the wheel, but did not use it to transport. Thus, all “rulers” and the top and important leaders had to walk everywhere and Xunantunich was a good stop.

Unlike the sites of the Maya in Mexico, the sites of Belize and Guatemala have not been wiped out by the Conquistadors (well, a few for sure), but disappeared for reasons that are not quite clear.

Most impressive was our guide, who told us about life here when he grew up. Which fruits and which trees they cooked, ate, or used as medicine.

In between stories from the Maya, as he had heard them a long (very long) time ago. As a Maya descendant, he had a different perspective on Belize and the occupying powers of those days.

In July 2016, researchers from Northern Arizona University found a 10-square-meter burial chamber containing the body of a 20-30-year-old man and numerous grave goods. The time of burial was estimated at 1300 years ago. What is unusual about the burial chamber is that it was built around the same time as the enclosing temples, whereas in the case of the Maya it was more common, as opposed to the Egyptians, to cultivate burial chambers in existing temples. 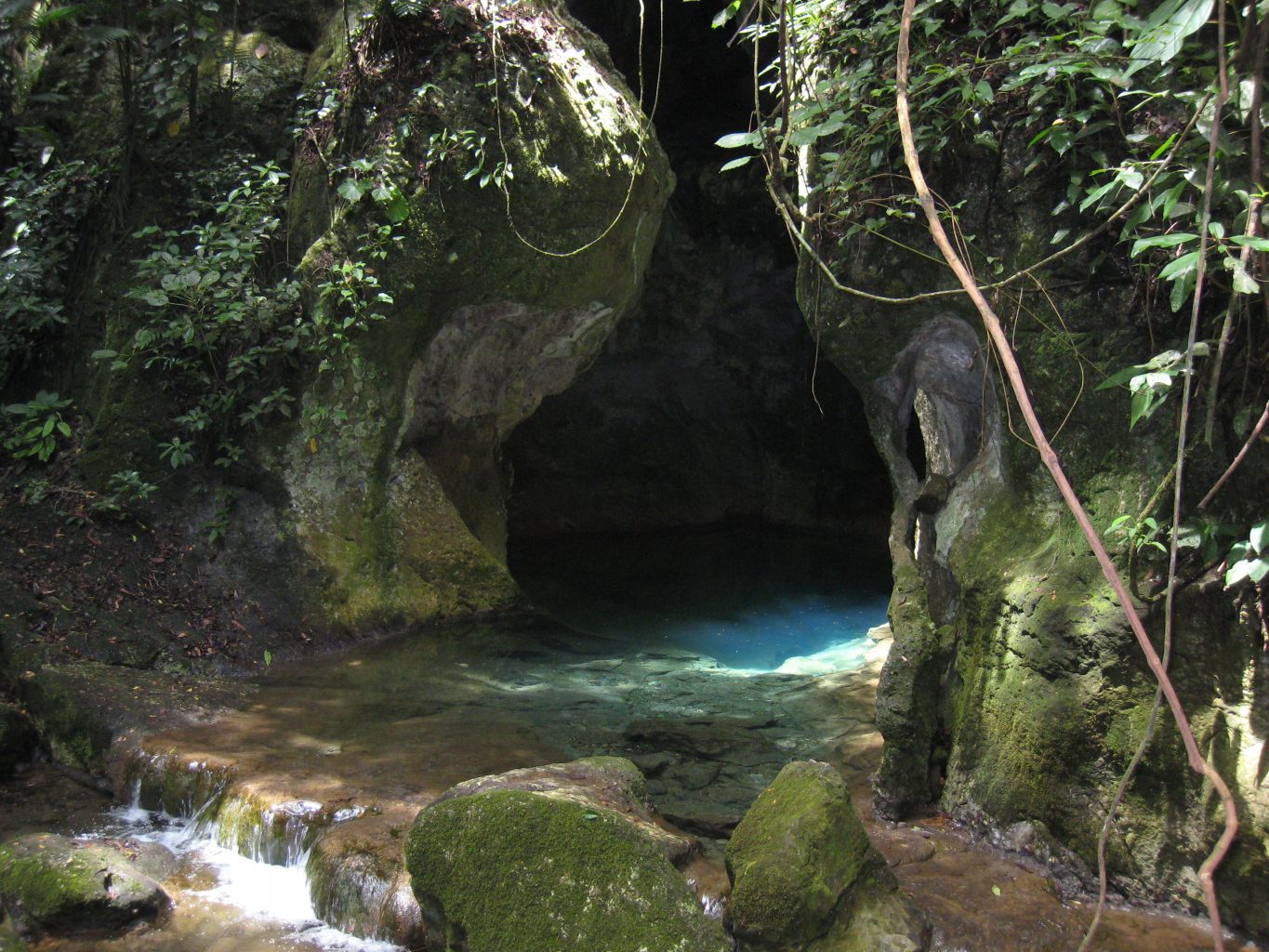 Actun Tunichil Muknal (The Cave of the Crystal Tombs), also known locally as ATM, is a cave in Belize, near San Ignacio. ATM is an archaeological site of the Maya with skeletons, ceramics and stoneware. There are several areas of skeletal remains in the main chamber. Most famous is “The Crystal Maiden”, the skeleton of a teenager – possibly a victim whose bones are calcified to a sparkling, crystallized appearance. The interesting thing in my view is the way through the cave and this went like this:

Helmet up and swim the first 20 meters. The water was cool and fresh, sometimes reaching down to the hips, sometimes shoulder-high and often just to the ankles, but always accompanying us on our amazing way through the caves. Our guide Danny, who was a guide to the ATM during the day and a police officer in San Ignazio in the evening, explained the ritualistic purpose of the Mayan cave in really good portioned stories. Since we were the first ones that day (it was 8am) it was quiet and dark. Our headlamps lit as the only source of light one or the other detail. Whenever I thought the cave ended, it went through a narrow gap, lying, crawling or floating on. At the end of the hike, a large stalactite cave with remnants of the Maya awaits us. Pots, shards and some skeletons were right in front of our feet. In Europe and of course in the US, it would simply be forbidden to offer such a tour. It would be too dangerous. Trip hazards everywhere and some passages were terribly tight. After about two hours stomping around in the cave, completely drenched, we were glad to be back on our way back to see the sunlight. 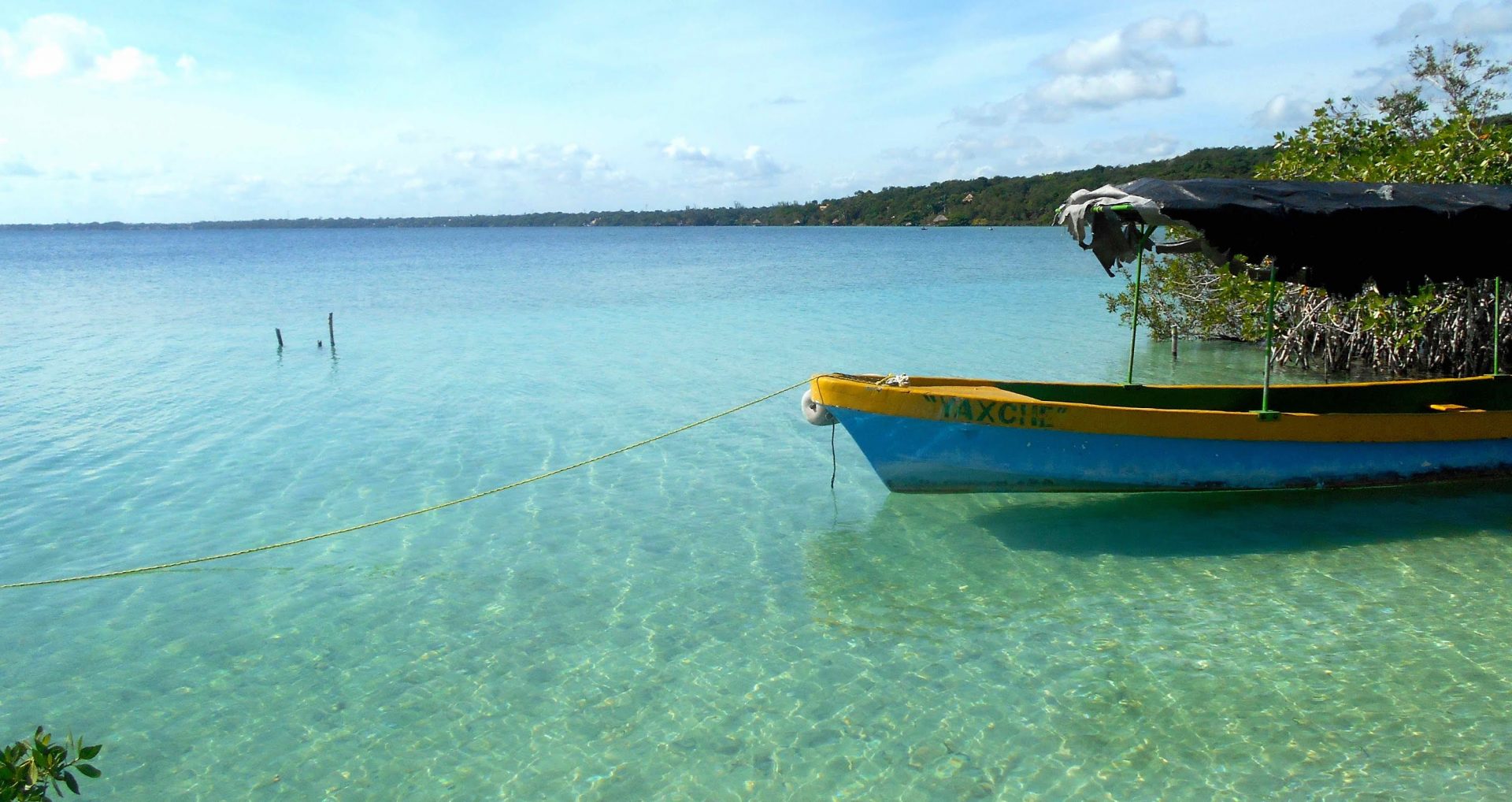 After our owner of the small Airbnb near San Ignazio had had a rage and Nina felt attacked, we also left this area to drive to Tulum in seven hours northern Mexico. From the border, our journey changed for good. We met a young German couple on the border, Martina and Sebastian, who just finished their holiday together and returned to Mexico. We had lunch in Bacalar, a young and dynamic city that was about to develop. Bacalar is located on the lagoon of the same name, a freshwater paradise that just looks breathtaking.

On the way to Tulum Beach, we took an Argentine traveler girl who has been traveling the world for five years selling homemade bikinis. She recommended a beach club (a restaurant and bar by the sea) where we ate freshly caught grilled fish and other delicacies, drank and marveled with open mouth the wondrous scenery on the beach of Tulum. Accompanied by a live band in front of a turquoise and jade-colored water, we watched in the sunshine in our lounge chairs, beautiful women and men of all ages, who were an interesting mix of hip, attractive, alternative and a little crazy. The fashion seemed to go just as different ways, as the restaurants, accommodation, bars and shops. There was a beach fitness center, everywhere yoga and chilled people who believed in love, peace and, of course, in money 😉

Here’s a scene that seems normal in Tulum:
“Come on guys, join our party”, a young attractive girl in a tight bikini danced in front of our car with a painted face and invited us to come to the party. In the shadows, men and women moved, to not too loud music – laughing, dancing and drinking.

As attractive Tulum is, it is so expensive. The former dropout Tulum is no longer affordable for everyone. You have to pay about 350 USD per night for a cabin by the sea, a bit cheaper in the backland. Therefore, we have decided for a hotel in the next tourist town “Playa del Carmen” a hour north.

“Playa del Carmen is what Tulum will be in 20 years,” a drop-out from Argentina told us in Tulum. “Tourism is unstoppable and good for the region, you just have to know when to move on, to a place to live without the tourists “.

So we found Playa del Carmen. It is made for tourists. Service is capitalized here and it has everything the vacationers heart desires. Chic, simple, expensive, cheap, hip, luxurious restaurants and bars line the 2 mile tourist road. Here you can party, enjoy a good glass of wine, dance, shop or just listen in the 30 degrees warm night to Mexican, Cuban and modern music and stroll through the streets.

A special thanks to our new friends Stefanie and Thomas, with whom we spent a few days in Playa del Carmen. We will see each other again!

Back to the Road

After 3 weeks we flew back to Houston Texas yesterday. From there it will now go east. In the future, we will often write smaller articles and post current pictures on Instagram and Facebook. Please give us your feedback in the comment section on how you are currently finding our blog and what we can improve.