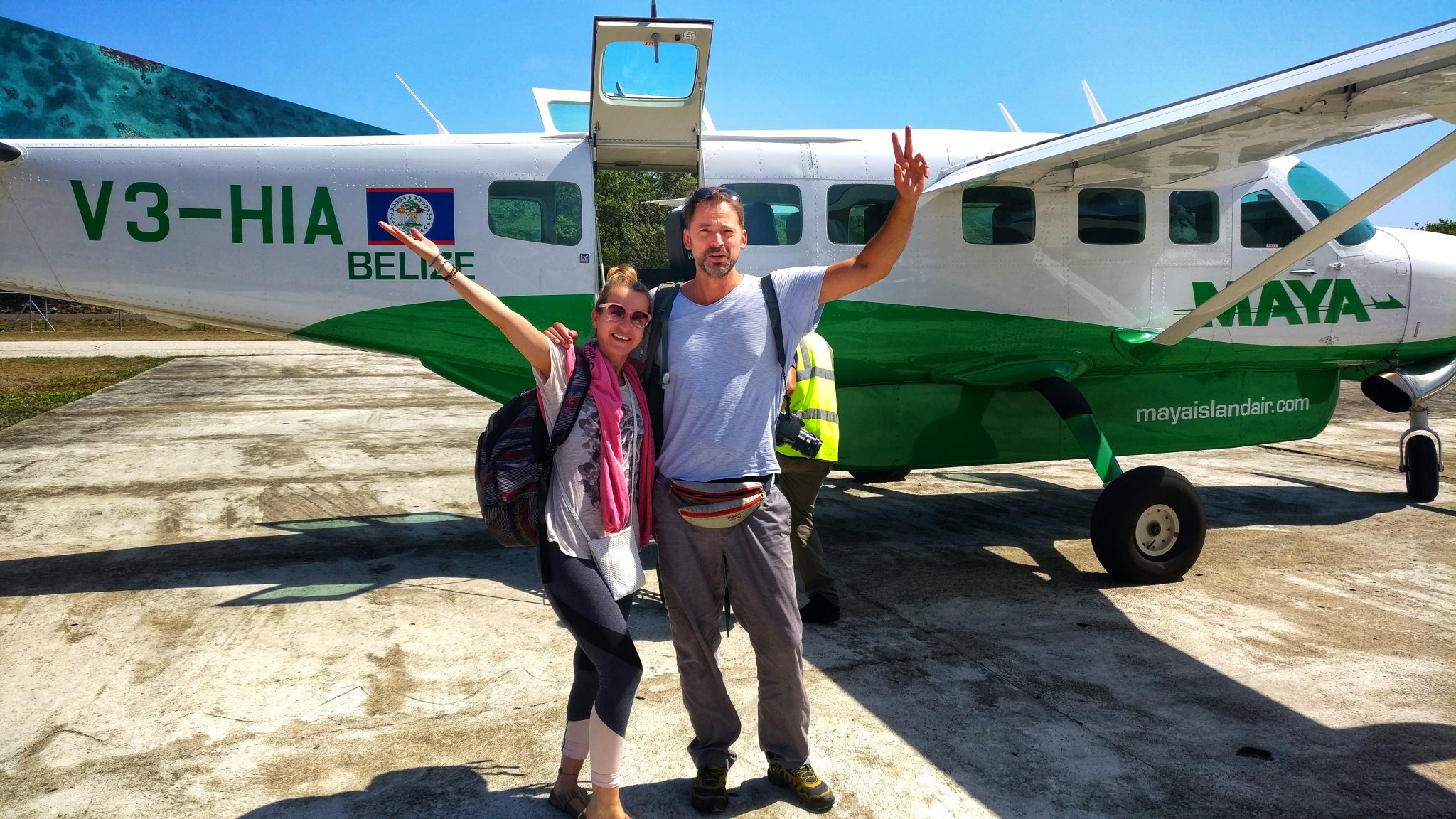 Moist, humid air welcomed us as we left the plane for the arrival hall. On the luggage rack, which seemed to be from the last century, our suitcases jerked up. Entry was easier than ever in another country. Passport control, stamp in – without looking up and a “Welcome to ..”

And ? already an idea where we landed?

After officially entering the former British colony, we joined a small local airline with a few others to reach our final destination, about half an hour flight south. The ticket was a “post-it”, with a few numbers on it. Once again we went through the security check, as in Houston without shoes, but much friendlier and less complicated. When I showed our Post-Its to the young airline employee in the departure lounge, he did’t know what to do with it. So he asked for our name. Unfortunately, he did not understand them, so I pointed to a very short list of names on his clipboard, two entries – our names. Check and we were ready to go.

Out under the sky again, we headed for our six-passenger light aircraft, under a cloudless steel-blue sky. We took a seat and after I had closed the entrance hatch from the inside, we started. The little machine wobbled and was shaken terribly for the first few miles. For the sake of the other passengers, I did not vomit, then when I thought I had to present my breakfast, it was quiet and it remained a secret for everyone, what I had for breakfast.

After half an hour we landed at the destination airport and went like this: The pilot throttled the speed and pushed the “stick” forward. Suddenly, the plane tipped forward and down and, in my opinion, went more into a nosedive rather than a descent. Shortly before the impact, the pilot pulled up and we put on the runway with a not so gentle jerk. Then, before I registered it correctly, I was thrown forward, which could have caused problems considering my non-fasten seat belt. Fortunately, my hand was faster than my head. It looked a lot more elegant to support me with my hand instead of my face in the front seat ;-). We certainly had another 20 meters until the sea began and the runway ended. I opened the entrance hatch when I was stupidly looked at by an employee of the local airport, outside the machine. We got out and waited for our suitcase about five meters from the plane. There was no barrier to the road – also it was not a problem when I entered the plane again alone, looking for my lost luggage check (again a post-it). No problem, as it turns out and “Welcome to …” Well? Where are we ?

With the help of a mobile phone that we borrowed from one, or rather the only taxi driver, we phoned the owner of our cabin we have rented, who picked us up half an hour later. A little later we moved into our small 5×5 meter cabin on stilts, 10 meters from the sea. In between, sand, palm trees stocked with green coconuts (just waiting to kill us), a few shrubs and nothing else. Next to us another cabin with guests from Vancouver, Washington, USA, which we were not only able to get to know shortly, but would also like to take them to our hearts.

If you do not know where we are yet, here are a few details of the country that gained its “independence” from the British Empire in 1981 but remained in the Commonwealth, bordering Mexico to the north and Guatemala to the west and south. Now, do not bring out the atlas or tap the Maps icon on your smartphone. The English-speaking country is considered an insider tip in Central America.The small country with its 400,000 inhabitants leaves you speechless (even different than you think) and then it changes into a storyteller. It creates memories that you can share with friends and family at the dining table for years, you’ll read why 😉

“The Jewel” as the locals call their land, has a spectacularly living reef – the second longest in the world, with a dive and snorkeling experience of the highest caliber. Some of the 200 offshore islands are privately owned and luxury hotels guarantee an unforgettable experience – not always a positive one. Due to the high prices, it also leaves a lasting impression on the bank account. For the more adventurous, the outback awaits with virgin rainforests (30% of which are protected), the largest cave system and the highest waterfall in Central America. Rivers, home to songbirds of all colors, iguanas and home of free-living jaguars. Miles of white and golden sandy beaches and an unbelievable variety of sea creatures – from whale sharks to the rare seahorses – enchant the maritime guest. It is a Caribbean country with Maya, African and European influences. In this country, no two days are the same. Kayak to the Farmers Market in San Ignacio to discover ancient Mayan ruins and cool off under a waterfall. Drink cashew wine through a jungle hike and watch out for monkeys or a jaguar. The latter certainly sees the hiker, even if it does not work the other way round.

So, all employees of the local tourist office can now stop reading, our bank account number can be found on the page “Support us”. For everybody else: there are dark sides that can not be hidden. First of all, the seaweed. A plague, not only here, but throughout the Gulf Coast. With the seagrass – so to speak as a bonus – there are the sandflies. Lots of it, tons better said billions of them (only on our beach 🙂 ). Half of them bit me. I looked like a litter cake after the second day. I do not want to talk on the third day. Home remedies, insect repellant and other things, which should stop the small biting beasts, failed – completly. Add to that the stink of old seaweed and tons of garbage, plastic and glass bottles, garbage bags, pallets, milk cartons and much that can not be identified in detail, floating around in the sea.

Although I had not been in such a country until now, this country seems to me like a so-called “third world country”. Why ? Many roads are gravel and dirt roads, there are villages that look like they were shown in a documentary from the ’90s in which Favela’s in Rio or the Township in South Africa. Children, women and drunken men, some with dark skins, lie or sit in the dust, beside a dozen opened garbage bags. Above them a more than dilapidated wooden hut on stilts. The color i can only guessing. Every now and then one of the four beams is broken and the house lies diagonally on one side on the ground. The house still seems to be inhabited in an adventurous way. How and why is unclear. On the street, garbage as far as the eye can see. If you walk along here, you will see empty eyes looking through you. Some children are skin and bones in torn T-shirts and dirty shorts. Some adults do not look better. Then and that’s the paradox, I see kids and mothers typing on their smartphones. They are probably posting their soul life or their last meal on Instagram.

Then, there are the high prices for everything: food, excursions, rents, food, etc. The tourist price is about four times as high as the prices for the locals. On excursions a little more. For example, a rental car costs about $ 90 per day for tourists and $ 20 for locals.

An interesting point is, that everything is old and somehow broken, but nobody cares. No matter if it was about bikes, doors to hotels, restaurants, toilets without flushing (sometimes a bucket with a plastic cup was placed next to it) or just the broken salt shaker in the “restaurant” (if there was one). Our rental car was no exception. Our moving scrap heap, as we affectionately called our white KIA, literally fell apart. Radio broken, rear windows broken, a huge crack in the windshield, the suspension crashed and groaned in any bump, the steering squeaked, the dashboard was completely scratched, the radio part of the car key did not work and the key itself, with duct tape and wire makeshift together – unfortunately not good enough, because we constantly lost the key part, or simply got stuck in the lock. In this case, I could only peel it off with a pair of pliers. On the takeover log, where the schematic diagram shows where damage is, my pens had to be active at every point. When I finished, the picture was almost painted as if a toddler had a coloring book in her hand. Funny was that we had to wait for the car, because it was just in the cleaning. We had never received such a dirty car from a car rental company, as after cleaning here. Did I mention that we had to tape the gas cap with “Duct Tape”?

And do you know where we are? to be continued