“Sic semper tyrannis”. Alice was four years old and had no idea what the saying meant in big letters on the 18-year-old men’s t-shirt. She could not even see it, because she was on the floor above the street, in the Day Care Center of the Alfred P. Murrah Federal Building, along with 14 other children, playing and not knowing what will happens next. It was 9:02 am on the morning of April 19, 1995. A sunny and beautiful day in Oklahoma City. Then everything went very fast, the van exploded in a gigantic fireball. In seconds the explosion reached the Day Care Center in the building and a second later the upper floors. The explosion was so strong that one-third of the nine-floor government building was simply blown away, leaving behind a 9-meter (30-foot) wide and 2.5-meter-deep (8foot) crater. 324 buildings within five blocks were damaged and Alice and 167 others found the death within a minute. 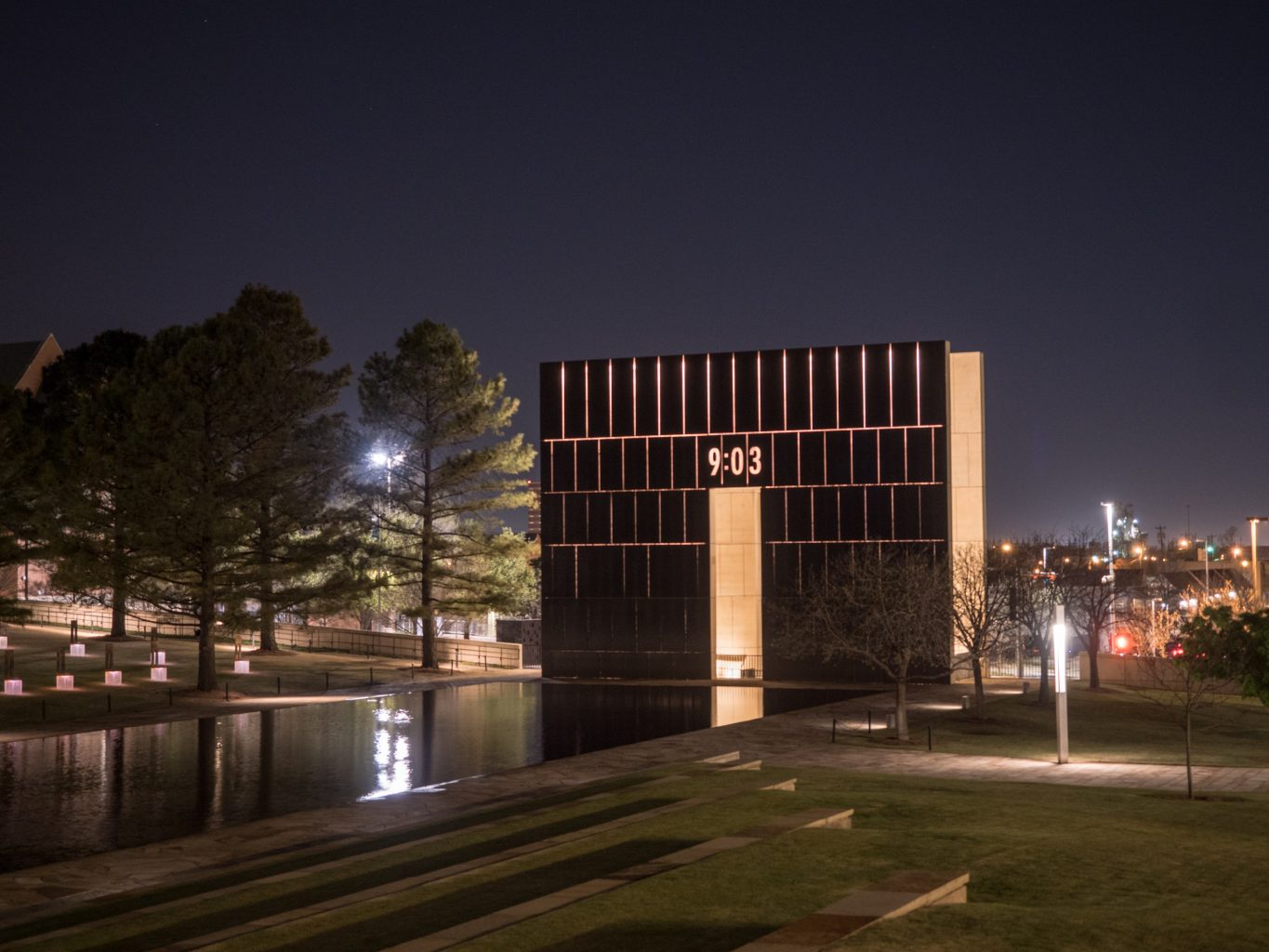 One way or another, it could be in a book, a thriller. But this is not a fictitious story, this is a terrible truth that happened in Oklahoma City about 23 years ago. We stood on the Survivor Tree, the tree that had survived despite the strong explosion and cleanup afterwards. The people of Oklahoma City took the tree as a sign of hope and reconstruction. The inscription on the inside of the wall reads “the spirit of this city and this nation will not be defeated; “It was late evening and the Oklahoma City National Memorial was lonely and peaceful ahead of us. The “Fields of Empty Chairs” – an illuminated row of 168 empty chairs, symbolized the victims of this tragedy along the “Reflecting Pool”. Two big bronze gates with the sounding name “The Gates of Time”. Before we entered the Memorial we saw the time 9:02 – the time of destruction. Within the memorial on the east entrance the time was 9:01 and symbolizes the last moments of peace, while on the opposite gate the time 9:03 symbolized the reconstruction and the beginning of the healing. Many words can be found for this Memorial, but we have learned in our journey so far that comparisons do not do justice. And so we enjoyed the silence and thoughtfulness that came over us at this Memorial. 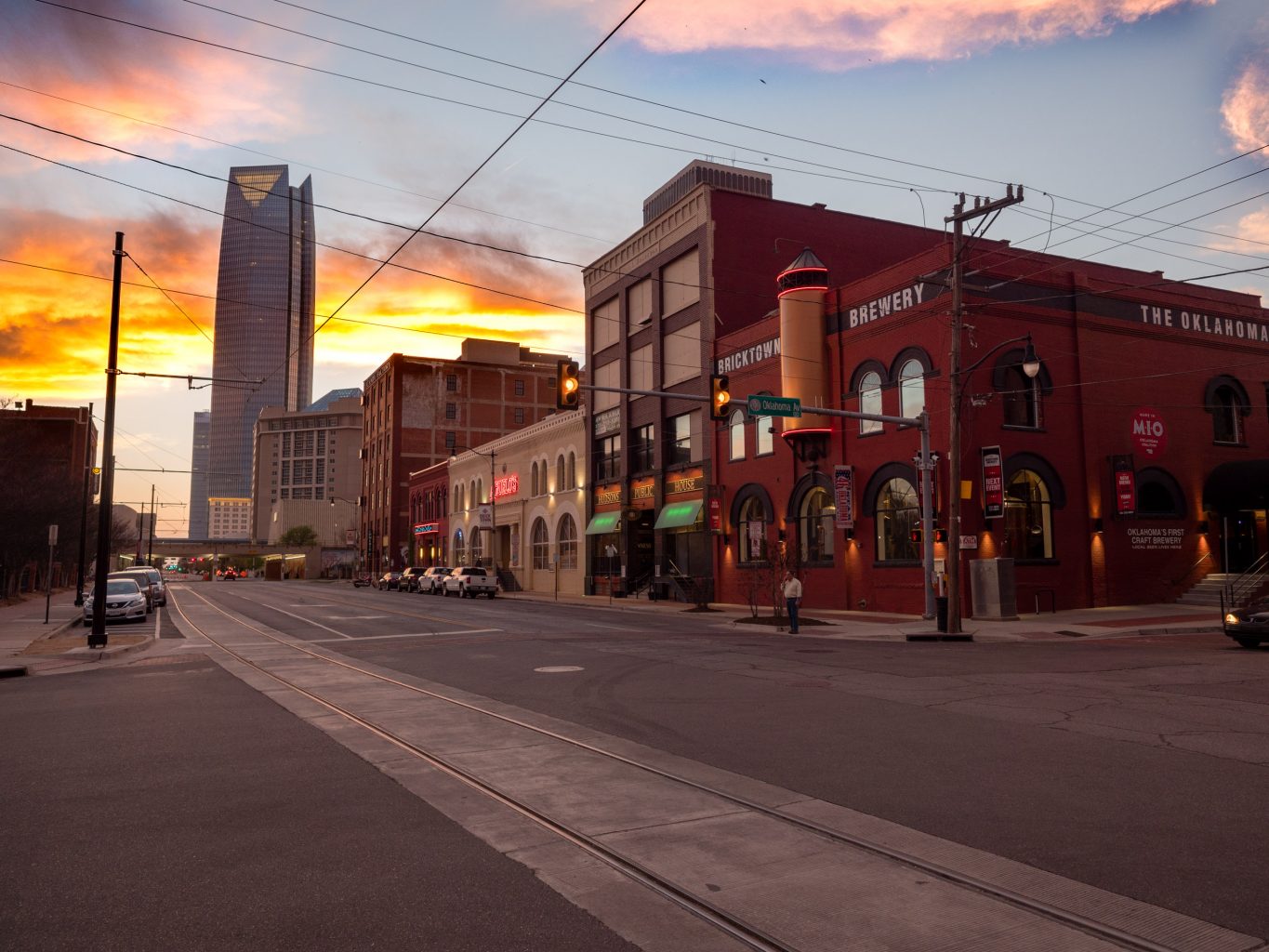 Downtown Oklahoma City presented itself in its own light and sound. Except for the Bricktown area, the deserted streets spread a silence that seemed unusual to a city of just 600,000 people. Restaurants seemed deserted, no music sounded from the city’s first brewhouse, although open, there was no traffic, no honking, no engine noise, no homeless, no people milling about “anywhere”, no dirt in the streets, no Cigarette butts, not even chewing gum, which crushes and “decorate” every town as white-gray spots. Oklahoma City seemed abandoned, although the following day a big baseball game took place in the famous “Chickasaw Bricktown Ballpark” and almost all hotel rooms in the city were occupied.

A few more words about the state of Oklahoma itself:
Oklahoma is located south and directly to Kansas. With almost 4 million people and the size of half Germany, it is not the most populated area. Oklahoma stands for one of the darkest times of the US and the natives. Andrew Jackson, the 7th US President, passed the Indian Removal Act on May 28, 1830. In this document of violence, and as some witnesses have called it, “Genocide Document,” indigenous people were forcibly relocated east of the Mississippi to a new area called Oklahoma, which means “red man.” Also this new area did not long belong to the natives. About 50 years later, the “land runs” began, in which settlers from the East got land. Land that had originally been promised to the natives. History is obviously repeated itself.